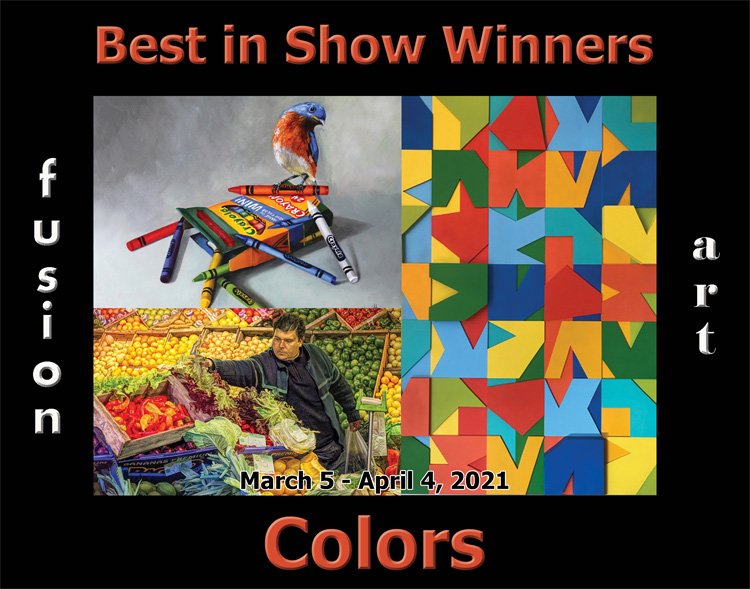 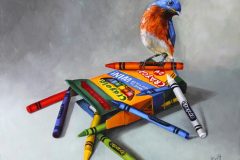 Barney Levitt has been creating ‘pictures’ ever since he was old enough to grip a crayon and scribble on his parents’ living room walls. He was given his first oil set when he was 10 years old, which set him on his destined path to becoming a professional artist. After graduating with a fine arts degree in drawing and painting, he never looked back.

Much of his work is still life driven as it affords him total control of setups and lighting. He likes working with ‘timeless’ objects, which give a sense of nostalgia to the viewer of a long ago era. Old radios, telephones and typewriters, rusted antique tools and glass bottles are often the subject matter of his work. He also incorporates bird imagery in much of his work. His still life’s vary in theme from the classical ‘old master’ setups, to the quirkier word play paintings.

Titles are important to him as they give the viewer better insight into what he’s trying to convey. Humor also plays out in much of his work and he strives for a narrative that will capture the viewers’ attention. His work combines naturalistic detail with quirky offbeat compositions that often juxtapose ordinary objects in ways the viewer doesn’t expect.

He received his B.A. in studio art from S.U.N.Y. at Oswego. He’s a member of Gallery Blink in Lexington, MA, Gallery Antonia, in Chatham, MA, and the Stewart Clifford Gallery in Provincetown, MA. He has been a member of The Copley Society of Art since 2004 and received his Copley Master status in 2017. He has been juried into The International Guild of Realism, The National Oil and Acrylic Painter’s Society, Oil Painters of America, and the American Artists Professional League in New York 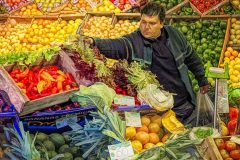 I have had a life-long interest in photography. I am mentor and self-trained gathering skills in methods from glass plate to film photography including historic darkroom techniques. I have translated these skills to the world of digital photography and use post processing to emulate film types and darkroom methods and painting. As a professor and research scientist, I used photography in my research in biochemistry, molecular biology and genetics to not only analyze images, such as chromosomes but to capture images via electron microscopy or to look at biochemical reactions by radioautography.

Photography was always a hobby in which I have focused on photojournalism, street photography, including candid portraits, and nature photography. Since retirement photography is my way of storytelling and of communicating with the imagination of others. I use the tools of digital manipulation of photographs along with in camera digital imaging to tell my story. It that story asks to be improved, I will use intense or enhanced colors to enrich the image not only to give it dimension but also to change the story.

When deciding whether to turn a digital photo into a digital photo painting, I ask whether the painterly look enhances the image and if it changes the story being told. Many places in life are enhanced by of vivid colors of nature such as those found in sunrises, flowers, fruits and vegetables and tropical waters or colors used to enhance environments such as classrooms. The camera can capture these, as can paintings from digital photos. 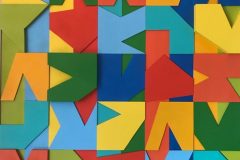 I've immersed myself into art and architecture for most of my life. Childhood memories include numerous visits to the Chicago Art Institute. Early college studies, in the Chicago area, included formal art instruction. Heading to the west coast as a young adult, my interests expanded to architecture and construction. Now living in the desert, I'm inspired by the light, colors and over all Environment.

Constructed Deconstruction Series: As a restorer of vintage and architecturally significant homes for over two decades I have recently focused on the creation of “Constructed Deconstruction Series”. The Series involves the process of creating a three dimensional composition of fragments of former structures. Block Composition Series A staple of childhood toy chests for centuries, wood blocks are influential in a child’s early spatial and mathematical development. The block compositions are a reminder of childhood playtime but also evoke adult themes.

Biomorphic Studies: My Studio space in the Coachella Valley establishes a geographic point of reference for inspiration. My Citrus Twist Biomorphic Studies are inspired by the prevalence of citrus trees in the desert’s suburban neighborhoods combined with the midcentury forms ever present in the built environment of Palm Springs and surrounding environments.

Terry can be reached via his email.