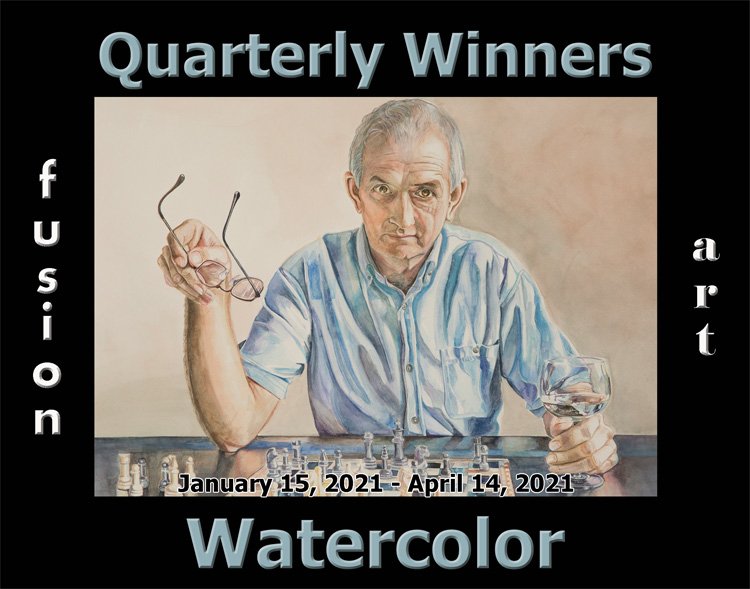 The top ten artists were given awards in the 2nd Watercolor international quarterly online art exhibition.  Below are the biographies and/or artist’s statements along with the artist’s websites or emails.

To contact these artists directly for purchase inquiries or to see more of their work, please visit the 2nd Watercolor Exhibition page for contact information.

Congratulations again to all the winners and thank you for sharing your talent with us. 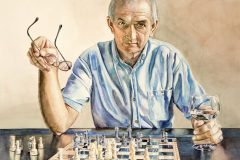 Judith Rackham was born in England, emigrating to Canada at the age of 21 years. Her education in the fine arts, specializing in China pattern design led to employment as a junior designer in the design studios at Wedgwoods, the renowned manufacturers of China and Jasper ware.

She has lived in Canada for many years and continued to paint and grow as an artist. During the decade from the mid eighties to mid nineties, she illustrated a series of ten natural history books which continue to be sold to the elementary educational market.

Following retirement, Judith has focussed fully on painting, continuing to grow and explore potential. Most of Judith’s work tells a story, The Opponent being no exception. 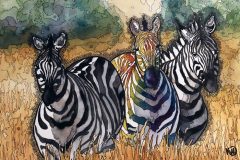 Kim is a self-taught artist who began by picking up books back in 2005. With 15 years of exploration in the medium, she has found herself a unique style utilizing vibrant and saturated pigments combined with India Ink. She finds herself centered around subject matter that needs a voice… the endangered animals. With her art as a platform, she regularly uses her paintings to begin conversations around whatever animal is depicted.

In 2019, she frequented the art festival scene opening conversations with whoever stopped long enough to hear her speak on the topic. 2020 saw cancellations in these festivals, so she turned to outreach to zoos and ended up assisting with the coordination of the Bowling for Rhinos fundraiser hosted by the Kansas City Chapter of the American Association of Zookeepers.

Currently, she is writing and illustrating a children’s book with a purpose to explain extinction to school children and to present ideas on what can be done to mitigate the current trends. 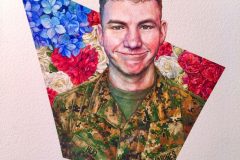 Born in China and raised in Southern California, Hunter is proud of his cultural diversity. He currently teaches illustration at the Ringling College of Art and Design in Florida. An award-winning illustrator, he has exhibited work in a multitude of international shows. Hunter has also done freelance work for film, television, comics, magazines, children's books, apps, music videos, businesses, and science journals. Hunter likes videogames, mythology, and animals. He plans to travel the world with his lovely wife, one city at a time. 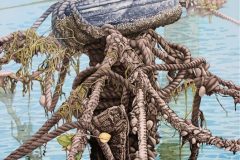 After 35 plus years of being a commercial designer/illustrator, I decided to embark on creating my personal visualizations to share with others what I see and maybe elicit an emotion that is undefined or undiscovered. To show what can't be seen and to talk about it without uttering a single word.

I hold a Bachelor of Fine Arts degree with distinctions in Print and Drawing from California College of the Arts (formerly California College of Arts and Crafts) and an MA in Medical Illustration (Biomedical Communications) from UC San Francisco, School of Medicine. I was a board-certified medical illustrator for 20 years.

Born and raised in Hawaii, I have been living in the SF Bay Area for over 40 years – mostly in Marin County, California. My art style is a visual vocabulary with a limited/restrained palette of color using simple strokes or stylized shapes to express an image. I want to bring the human element back without competing with the digital or photographic mediums — strictly a hand-eye craft.

Currently, my pieces are mostly dry-brush watercolors. Watercolor is a very unforgiving medium although I’ve learned to control it. I do a lot of planning when I paint and work in a very methodical way. I do use photo references that I take on location — as painter Richard McLean once stated,“the horse ain’t going to stand still!”

I’ve always felt that good art is not unlike good writing or good music. I do my art to make me feel good and to make others feel better!

“The Mooring Series” is a watercolor collection of just that. Initially, I just liked the idea as a subject matter but as things progressed, I wondered WHY was I doing this. What was the metaphor? We are all attached to something/someone that offer us security/comfort of sorts or bondage. Some of us have been moored so long that we have gathered the barnacles and whatever influences from the tides of Life. Some of us break away early but others maintain their hold until their final days when they cannot maintain their strength – burdened by years of buildup, becoming brittle, snap and fall away — to be replaced by a new tether. 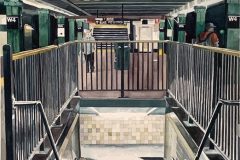 Heather Jovanelli's work is an exploration of contemporary life and the phenomenon of sight. She lives and works in Oakland, California and her website is www.jovanelli.com. 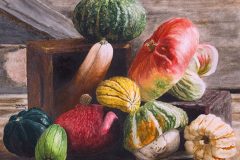 An artist based in Massachusetts, Valentina Gottschling uses the beauty of the state and nature's bounty to inspire watercolor paintings based in realism and impressionism techniques.

She can be reached via her email. 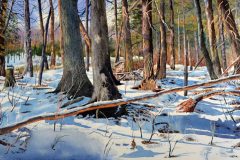 Artist Statement: Nature and time provide me with ever challenging opportunities to capture the simplicity, yet detailed images created by the Master's Hand. The variations of colour and light continue to present many remarkable experiences especially when the paint works its own magic. Rust and decay are my forte.

Roy can be reached via his email. 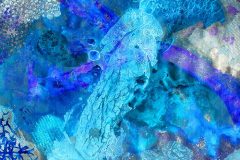 Marcia grew up in Brooklyn, NY. As a child she had very poor eyesight, so grew up constantly aware she wasn’t seeing everything other people could see. Buying her first camera, at 10 years old, opened a new world to her. for the first time, she could see the world clearly. From that moment to the present, she has always had a camera close at hand.

Her professional life focused on technical fields which affected her creative work as well. Her photography consisted of capturing the literal world around her, with an emphasis on landscapes, structures, architecture, and waterscapes.

When Marcia retired, she searched for new activities to occupy her time. Her approach was to take adult eduction courses in subjects she didn’t know anything about: abstract photography, drawing, and painting each captured her enthusiasm. Since then, she has devoted her efforts to all 3.

Today, Marcia spends her time creating art to express her vision of the external and internal world she experiences. She uses her photography to convey the beauty and patterns of her physical world, her ‘fractured fotographs’ convey the possibilities of manipulating the physical world to show new patterns and possibilities and her paintings create original work that conveys emotions, feelings and mood. Marcia’s goal in all her work is to convey, to the viewer, her reactions to the world and everything it contains. 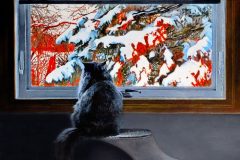 Cher Pruys was born in Regina. Over the years she lived in many places including Saskatoon, Calgary, Edmonton, Ottawa, Fort Frances, settling into her present home in Devlin, on the banks of the Rainy River with her husband Mark, 4 dogs and 2 cats.

By age three, Cher was seldom found without a drawing tool in hand. She worked in pencil, charcoal and ink over the years, until, she picked up a paintbrush at the age of 35. Beginning with oil paints, she found her chosen mediums in acrylic, water color and gouache.

Although self taught, her dedication and talent has seen her work juried into 99 International exhibits, as well as exhibits in numerous non juried shows. She has won 75 awards for her work at the International Juried Exhibits. Included in these awards, the first recipient of a major Canadian National Award, The Mary Pratt Crystal Award of Excellence at the 2014 SCA Open Juried Exhibition, The SCA 1st place award of distinction twice respectively, 2016, and 2017 at The Canada’s 150 show. The Gold Medal recipient for Figurative Painting in The Mondial Art Academia’s International 2018 Competition. The Aviation Week & Space Technology Award Best of the Best, and the ASAA Award of Distinction for the best painting in the ASAA International Space & Technology Exhibit & Competition, consecutively for 2 years. She has had 14 solo exhibits. Cher is also an avid fused glass artist, and a certified teacher of piano and guitar.

Her painting “The Bubble” had the honour of being part of the Masterworks from The International Guild of Realism Tour. She Was Elected to the American Society of Aviation Artists as an artist member in 1996, and eventually Was elected as a Foreign Affiliate Artist Fellow, one of only two Canadians receive this honour. Her work has graced the covers of 3 books, 14 magazines, and has-been featured in over 50 international publications. Cher’s works have found a permanent home in private and public collections worldwide.

Cher’s artistic style can be described as Realism with a hint of Abstract in her latest works. 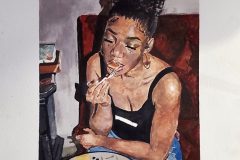 Drawing from a young age, Abigail has since then used art to explore and make sense of the world that surrounds her, and over the years began to raise discussion on social and racial equity. Her body of work ranges from large scale paintings of BIPOC experiences, to intimate multi-media representations of individuals who share connections or similar life experiences with her.

Using traditional skills such as oil, watercolor and charcoal drawing to depict modern scenes, Abigail is intrigued by the depiction of those who are underrepresented and dismissed. Inspired by others, she aims to create art that provides a homage for comfort, as well as raise questions about social class, race, culture, and identity.

Abigail is currently earning her BFA in Drawing and Painting w/ a minor in Graphic Design at Laguna College of Art and Design, Laguna Beach, California. She has been a featured artist in the OC Art Blog, LA Times, and Hunker.com